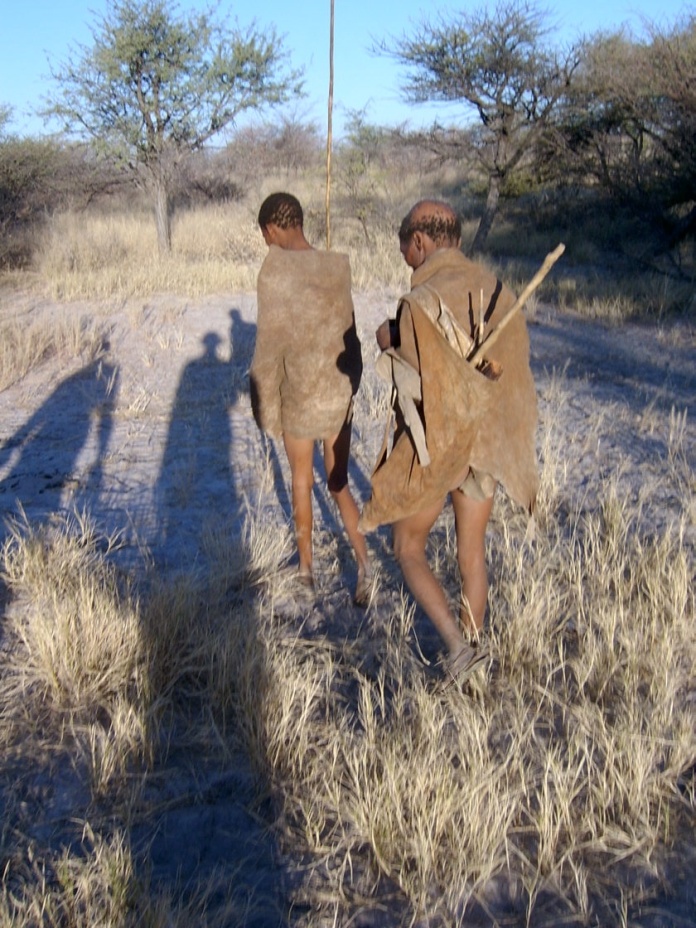 Adults in the Khoisan (Bushman) tribes of southern Africa are only 4’9’’ tall, on average.  These wise and ancient people, who have survived in the most adverse conditions and preserved their way of life for millennia, use this traditional greeting when they meet:

“I saw you coming from afar.”

What’s special about this statement is that it tells the person approaching, I noticed you.  It tells him more than that, in fact – it tells him that he is noticeable (in spite of his diminutive stature).

This greeting assures the approaching person that his presence is significant.

Other indigenous peoples, both in Africa and in other parts of the world, traditionally use physical markers (branding, tattooing, or other forms of body modification) to distinguish themselves as part of the tribe; this gives members of the group a sense of belonging.  In the modern world this feeling of being a part of something bigger than oneself can be fostered through the use of uniforms and other dress codes (amongst other identifiers).

Every society on earth, in fact, depends on its members having a sense of being a part of that society and being capable of serving that society (in some way or other) in order to function at its best.

The psychologist Alfred Adler talked about this sense of belonging and significance as being fundamental to emotional health and development.  A cornerstone of Adlerian psychology is the recognition that we, as humans, all share the same basic desire for connectedness and a need to feel that we have something to contribute.

We all want to know that there is a place for us in the world, and that we matter.

When I look back at my life, I have to admit that my lowest points have coincided with these fundamental emotional needs not being met.  When I’ve felt on the periphery of a group in which I’d like to be included; when I’ve been deliberately dismissed or excluded; when things others have said or done have made me feel foolish and unequal to those around me – these challenges have threatened my very sense of self and made me, at times, deeply unhappy.

My boys are about to start at a new school.

Their accents will be different from those of their classmates; they will walk into their classrooms as strangers to the other students; they won’t know where the lunchroom is or when recess starts or what the teachers mean when they tell them to ‘rattle their dags’*.  They will not belong.

In my own experience, it’s par for the course to feel a lack of belonging when you’re the new kid.  After all, the other kids know nothing about you – and unless you appear supremely attractive and cool and dazzle them with your sophistication, you are likely to be on the periphery of any established cliques for some time.  This was true in my case, except that with good humour and a healthy dose of forgiveness those who had begun as my enemies eventually became my friends.  I therefore know that this scenario into which my boys are being thrust can end happily – but still, if I thought I could somehow foster in them a sense of belonging to their new school (and within their peer group) right from the outset I would.

The hard part for me as a parent is that I know that sometimes social alienation can threaten one’s very sense of self.  It’s possible that my boys might be ostracized, or ignored, or even just not really noticed; and I know that, if they have a particularly rough time fitting in at school, my beloved sons might even begin to question whether or not they are actually significant.

So what can we do for them, as their parents, to mitigate against these challenges?

Well, we’re going out of our way to give them a sense of belonging.  We’re making a real effort to encourage them and illustrate for them how significant they are.  We’ve been doing that consistently and intentionally over the past three or four months; part of the reason we wanted to travel with them was to foster a sense of belonging (within our family unit) and to encourage them to see how they could contribute in their own unique way.  In fact, it’s not just when we’re travelling that this is important – we are always working to create a culture of belonging in our household and impart to our boys a sense of their own significance to us and to the world at large.

We need to tell our kids, whenever they face discouragement that threatens their sense of belonging and significance,

“I saw you coming from afar.”

Even if this current transition into a new school community goes unexpectedly smoothly, we know that our kids are bound to encounter situations in life that will challenge their sense of belonging and/or significance.  This is what we can do to counteract the effect of those difficulties:

*Rattle your dags is a kiwi expression (unsurprisingly related to sheep), meaning ‘get a move on’ (hurry)

I remember the first parenting course I ever took – and there have been a fair few since – in which the instructor began by asking us parents to name qualities we would like to encourage in our children as they grew.

All good, admirable qualities.  (Almost) all great predictors of ‘success.’

And then I added one:

Whereas the previous suggestions had garnered head nods and murmurs of approval, now instead there was puzzled silence.

Humility? you could hear them thinking;

Why would you want your kid to feel insignificant?

Why would you want them to be WEAK???

But you see, that wasn’t what I meant at all.

Now, I don’t know a single little kid who believes himself to be less important than anyone else.  I should qualify that; every single ‘normal’ kid (i.e., from a loving, nurturing home) naturally thinks the whole world revolves around him.  And that’s the way it should be.  Kids should understand their precious, unique, adored status in our lives – they should grow up with an innate sense of their worthiness of our love, respect, and care.

But that sense of entitlement to everyone’s attention and adoration, and that ‘me first’ mentality that we are all born with?  That’s actually selfishness.  And it’s only in teaching our kids humility that they are able to put those attitudes in perspective and learn to put the needs and comfort of others ahead of their own.

My mother had her own way of instilling a sense of humility in us.  We joke about it now, because (in retrospect), it wasn’t actually so helpful in other ways.  But it certainly did curtail any arrogance in us when she reminded us, kindly (and often enough that, as adults, we could repeat it back to her in jest):

“Don’t forget – no matter how good you are at something, there’s always someone else out there who’s better at it!”

So there was a subtle message about the undesirability of attempting greatness, which acted as a subconscious influence in my early childhood. And it was perhaps this attitude that led me to declare (whenever interrogated with that question asked so often of young children, “What do you want to be when you grow up?”), “I don’t know what I want to be, but I know what I DON’T want to be, and that is famous.  Because famous people get assassinated.”  Yes, I was a barrel of chuckles as a kid.

Aside from my well-exercised laziness and a general inability in the athletic arena, I consider my mother’s admonition to blame for my failure to become an Olympian.

Nevertheless, remembering my place in the grand scheme of things did have its uses.  I learned that praise given by others is far more satisfying than a self-induced pat on the back.  I learned that it’s far more fulfilling to champion those around me than to focus on all my small failures that hold might me back from ‘achieving.’  I learned that there is great joy to be had in diversifying my interests, rather than concentrating on one thing at the exclusion of all else: the old descriptor, ‘Jack of all trades, master of none,’ seems to me a recipe for a happy and balanced life.

I have also been given circumstantial (and substantial) opportunities to learn humility throughout my life.  Technology, in particular, although very agreeable in many ways, frequently teaches me where I really fall on the grading curve of life:

All these ‘technological advances’ do nothing to advance my sense of self-importance.

In addition to this repeat program of humiliation-by-machine, I do also try to bear in mind that it is only by the grace of God that I am living in an era in which (Darwin Awards aside) my survival does not depend on my natural ability to see well and run fast (neither of which are attributes to which I can truthfully lay claim).

But, of course, on a more serious note, there is a great strength in learning the quality of humility.

It is in recognizing my insignificance in the expanse of time and history that the wonder of God’s love becomes most significant.  I, being practically nothing, am somehow worthy of His attention.

“I praise you because I am fearfully and wonderfully made; your works are wonderful, I know that full well.”

So this is the strange truth of humility: we are impermanent; fragile; mercurial; and unreliable in this life – in short, we are human – and yet, to Him we are everything.